Sunday, October 31st, 2021, was a historic day for Indonesia. At the closing event of the G20 Summit in Rome, Italian Prime Minister Mario Draghi handed over a hammer to Indonesian President Joko Widodo to symbolically pass the baton of the G20 Presidency. Joko Widodo hit the hammer in acceptance of Indonesia’s G20 Presidency in 2022.

Working together towards sustainability

This theme fits Indonesia’s values and characters like a glove, especially the concept of gotong royong. Gotong royong can be roughly translated as working together. It is necessary for our efforts to achieve Sustainable Development Goals. COVID-19 pandemic has knocked down almost all sectors of society and, with it, reignited the spirit of gotong royong within us. In a world of VUCA (Volatility, Uncertainty, Complexity, Ambiguity), gotong royong becomes a beacon in the dark for Indonesia and the rest of the world.

As a country with the biggest (11.92%) Muslim population in the world, Indonesia has a very high potential to contribute to the growth and development of the global economic ecosystem through Islamic economics & finance. Indonesian President Joko Widodo has been one of the leading figures who embrace the idea, and he has the chance to turn this positive opportunity into reality as the legacy of Indonesia’s G20 Presidency. This statement comes not without facts and data.

After his inauguration in 2014, President Joko Widodo formed KNKS, the National Committee of Islamic Economics. He then perfected it to KNEKS, the National Committee of Islamic Economics & Finance, at the beginning of his second Presidency in 2020. KNEKS is led directly by President Joko Widodo and Vice President KH Maruf Amin. The Minister of Finance, Sri Mulyani, was appointed as the Secretary of KNEKS and the Head of The Indonesian Association of Islamic Economists (IAEI). Meanwhile, Erick Thohir, the Minister of State-Owned Enterprises (BUMN), was chosen to lead the Sharia Economy Society (MES).

Under Erick Thohir, three state-owned Islamic banks were consolidated into one Bank Syariah Indonesia (BSI), or Indonesian Islamic Bank. BSI is projected to be in the top 5 biggest banks in Indonesia and the top 10 biggest Islamic banks globally. Step by step, Indonesia starts to show its achievement in Islamic Economics & Finance, such as by taking first place in the Islamic Finance Country Index (IFCI) from the Global Islamic Finance Report 2021.

This achievement is an important reflection of our place within the national and international context. It indicates that Indonesia’s Islamic social finance sector is the most dynamic one in the world. Together, we must support the development of the Islamic socio-finance industry and green economy to achieve the SDGs.

BSI as a game-changer

Naturally, Islamic Economics and Finance may become the hope of our economy in the present and the future. As of August 2021, the Islamic banking industry in Indonesia is performing better than its conventional, national counterpart. It showed significant YoY growths in asset, financing, and third-party funds. The values and characteristics of Islamic Economics & Finance fit those of the SDGs, making it imperative to peruse it to achieve the SDGs in Indonesia and inspire the world to do the same. This concept should be the most important point Indonesia delivers in its G20 Presidency.

Poverty reduction and community welfare are the keys to answering those queries. Strengthening Islamic Economics & Finance can parse how it can happen. As the intermediary fundraiser and distributor, BSI can contribute through productive financing that helps customers fund their enterprises with profit-sharing contracts (or akad, in Islamic economics terms).

Furthermore, Islamic Economics & Finance has social instruments such as zakat, infaq, sadaqah, and waqf that are useful to lessen economic inequality. There is 500 trillion IDR worth of potential in this system, and only 75 trillion IDR has been realized. This is the potential BSI focuses on in developing its ecosystem.

As the only bank that President Joko Widodo declared its establishment at the Merdeka Palace, BSI can truly be a game-changer on these issues. Hope skyrocketed again as BSI acquired the principal license of a representative office in Dubai. BSI is grounded on earth and seeking the sky for ummah (people) and the nation. 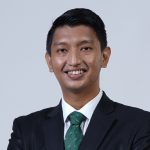 Arief is the Vice Head of Sharia Economy Department of the Indonesian Chamber of Commerce and Industry (KADIN) and an Independent Commissioner of Bank Syariah Indonesia.